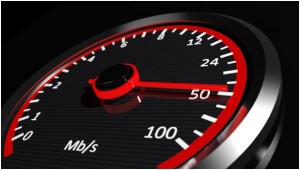 This calls for a more reliable indicator, which is the Average Peak Speed. It is also to be noted that fast broadband connection highly influences digital services like TVs which are connected and cloud computing. Broadband connectivity can also be directly correlated with an increase in a country’s GDP.

In Ireland the minimum speed is placed at 30mbps in remote areas and increases to about 40-70mbps in the most populated areas and urban centers. Ireland has a digital agenda which envisages a 100% coverage of 30mbps by 2020, companies like eir.ie endeavor to roll out 1Gbps connection speeds in the near future. Ireland’s current broadband coverage stands at 98% for both mobile and fixed connections. In terms of broadband average connection speed it was placed 4th in Europe and seventh in the world at 13.9mbps in 2014 and in the first quarter of 2015 placed 1st with speeds of 17.4 avg. and 60.7 peak Mbps.

This is the case although it has a very slow roll out program as compared to other countries in Europe. Its position in relation to broadband speed places it above much stronger economies in Europe like the United Kingdom and Germany.

Ireland therefore compares favorably with other countries in the European Union like the United Kingdom, which is actually said to have the best broadband network in Europe. This postulation has been developed by counter checking factors such as its take-up of super-fast broadband, speed and pricing. Other factors which affect the development of broadband connectivity and coverage are also in favor of the United Kingdom as compared to Ireland. These factors include its geography, population size and density as well as the take-up choice of Internet providers. It is said that Britain has a super-fast broadband up-take of about 73% and is ranked first among Europe’s five strongest economies with 30mbps speed. Compared to Ireland the UK has a higher uptake of 83%. It is also ahead in terms of usage, pricing and choice of fixed and mobile connections. Ireland fairs well against the UK when it comes to the average connection speed, which stands at 13.9 compared to UK which lies at position 18 with an average broadband rate of 10.7mbps.

According to the 2014 Akamai report Spain has an average connection speed of 7.8mbps and lags far behind Ireland in that respect. It has an overall score of 0.49 and ranks 14th in the 28 European Union member countries. Major developments in broadband connectivity are ongoing in Spain and it has a 73% household broadband access which is much lower than Ireland’s 98%. As compared to Ireland many Spaniards have a low levels of digital skills (about 42%) and thus decreasing the demand aspect in connectivity and coverage. However, the supply side by Internet provider companies is very robust. Spain is therefore increasing its connectivity to meet the EU average broadband connectivity but slower than Ireland in terms of fixed and mobile connections. But to be noted, is seeing a faster increase of high speed fixed and mobile digital connections which should also put more focus in reducing obvious gaps between various regions that makes Spain lag behind in coverage when compared to Ireland.

Ireland also fares better than Germany which is a power house in Europe. This is not only in terms of average broadband connectivity, but also in terms of speed and coverage. The two countries seem to be in the same league when it comes to Urban versus rural or remote areas broadband coverage. Germany’s densely populated areas, just like Ireland’s, enjoy faster Internet speeds and coverage as compared to those in the rural areas which have either slow broadband speeds or no broadband connectivity. ADSL is the most widely used type of broadband connection both in Germany and Ireland as opposed to the use of fiber optic or cable connection which is very expensive in terms of pricing. It relies on the telephone line to connect to the Internet. It is the cheapest broadband option for many in Ireland and Germany. Many people in Ireland avoid cable connections due to their very high prices and this is especially true for rural population whose choice of DSL far much exceeds fiber optic subscriptions.