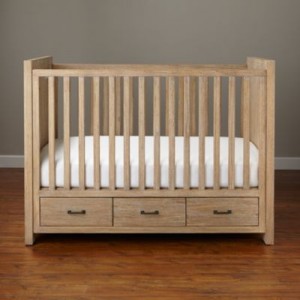 In many households, who’s sleeping, who’s not and how to make it happen is the bane of new parents’ existence. While you can’t really control baby’s sleep patterns, you can ensure she’s snoozing safely. Several government and consumer agencies have turned a critical eye toward baby products marketed as safe sleep aids for nurseries and cribs. Their findings yielded some pretty alarming statistics regarding infant injuries and fatalities that will have new moms and dads rethinking those sweet, cozy-looking bumpers and snugly loveys. Read on to learn how you can keep your baby out of harm’s way, at least while she’s catching her zzzs.

Recently, the U.S. government issued a ban on drop-side cribs, as they have been linked to more than 30 infant deaths in the past decade. If buying a new crib, make sure to select one with fixed sides and slats no more than 2 3/8 inches apart that has been approved by the Juvenile Products Manufacturers Association and the U.S. Consumer Product Safety Commission (CPSC). If you already have a drop-side version, check with the manufacturer for any recalls on your model. Visit cribsafety.org for information about how to immobilize a drop-side crib. Important to note: A crib should not be placed next to a window, near outlets or within reach of blinds or blind cords, tabletops or dressers to avoid fall and strangulation hazards. If using a secondhand crib, make sure it’s in perfect condition. If parts are missing, damaged or broken or it’s more than 10 years old, play it safe and buy a new one.

Studies have shown that using a pacifier while sleeping reduces the risk of SIDS because the sucking keeps baby from snoozing too deeply and may help keep nasal and oral passages open.

When it comes to dressing your crib, remember this: Less is more. The American Academy of Pediatrics (AAP) advises an infant’s crib should have nothing more in it than a firm mattress and a fitted crib sheet — no blankets, pillows or stuffed animals, at least for the first year. If you choose to use bumpers, remove them when baby can stand so they can’t be used as a step. Hanging mobiles are fine, but keep them out of reach, and remove them by the time baby can sit up.

Keep This in Mind Too

Last fall, the CPSC and the Food and Drug Administration issued firm cautions to parents regarding the use of sleep positioners and the dangers of baby-monitor cords. Designed to keep babies on their backs to supposedly decrease the risk of sudden infant death syndrome (SIDS), sleep positioners, say the agencies, are the alleged cause of 12 suffocation deaths of infants in the past 12 years. Loose cords on baby monitors account for six reported strangulation deaths since 2004.

The majority of parents agreed, however, that in the quest for rest, one size does not fit all babies. “After having three children,” Trenny Suggs of Spring Hill, Tennessee, told us, “I have learned that you have to do whatever is necessary to help your children sleep.” And for many of you, that means changing your game plan. According to our results, only 11 percent of moms actually planned to co-sleep with their babies, but a whopping 42 percent ended up doing so once their little bundles arrived. “During my pregnancy, I studied controversial topics, such as co-sleeping, and thought I knew what I would do,” shared one reader in California, who swore that she wouldn’t co-sleep but now spends every night in bed with her 5-month-old daughter. “But children set their own schedules. I never understood that having a baby means giving up complete control.”