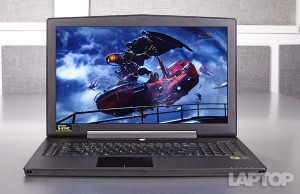 Looks can be deceiving. At first glance, the Aorus X7 Pro-Sync laptop looks like it would be best suited to editing video or photos. And while this slim 17-incher could ably handle those tasks, it’s a gaming notebook through and through, squeezing a pair of Nvidia GPUs and two SSDs into a 0.9-inch frame. Add in support for G-Sync technology, which fights screen tearing and motion blur, and you have an absolute beast of a machine that puts larger notebooks to shame.

The previous Aorus X7 was a beautiful specimen, capable of capturing the most jaded gamer’s gaze. The same goes for the X7 Pro-Sync, because it has the same chassis as its predecessor.The large chrome eagle emblem sits in the center of the black aluminum lid, lending its regal countenance to the overall presentation. The laptop’s rear features a rather large hinge that lets you tilt the display back farther than most notebooks.

The interior is equally fetching, starting with the backlit eagle power button situated between the pair of angular speakers. The backlit keyboard dominates the deck, sitting in a pronounced recess with a row of macro keys along the left. Directly below the massive keyboard lies the glistening glass touchpad.

While there’s no question that the X7 Pro Sync is lovely, it has one major flaw: it’s highly susceptible to fingerprints. No sooner did I get my hands on the laptop than I was reaching for a cloth to wipe it down. The touchpad is the biggest offender, displaying a litany of prints and smudges.In terms of ports, you’ll find two USB 3.0 ports, HDMI, a mini DisplayPort and an SD card reader on the right. Along the left, there’s another USB 3.0 port, a Surround port, Gigabit Ethernet, a VGA port and jacks for a mic and a pair of headphones. If that’s not enough, you have two USB 2.0 ports and the power jack in the rear of the laptop.

Gaming Performance: Two GPUs Are Better Than One

A single Nvidia GeForce GTX 970M GPU isn’t a match for a GTX 980M graphics card. But throw another card into the mix and suddenly you’re outperforming some of the most powerful gaming laptops on the market. The X7 Pro-Sync’s two 970M GPUs with 6GB of VRAM are in a SLI configuration, meaning the GPUs work in tandem for increased performance.I wasted no time putting the spurs to the X7 Sync-Pro, cranking the settings to ultra and enabling all of the effects, even HairWorks, Nvidia’s technology to render more realistic-looking hair and fur. The laptop delivered an average 36 frames per second when playing Witcher III. That jumped to 42 fps when I disabled HairWorks. On high, I saw an average of 55 fps, which increased to 65 on normal.