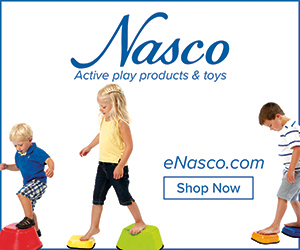 Nasco has been a fantastic source for educational supplies for decades. They carry many lines of resources, including many outside the educational arena. Of special interest to homeschoolers should be their inventory of resources for art, science, math, reading, and other school subjects. However, Nasco generally carries supplemental items that will work for homeschooling rather than core curricula.

For example among their reading resources are beginning readers, reading comprehension workbooks, and magnetic letters. While they have some reading programs, they are classroom oriented rather than reading programs popular among homeschoolers.

Math resources include items such as math games, math manipulatives, flashcards, and play money but few workbooks. Their drop-down menu shows that they have 186 math games and 92 options for Base 10 materials! Years ago, I purchased inexpensive algebra tiles from them to add a hands-on element for such tasks as factoring polynomials, and I have yet to find such a product elsewhere.

Arts and crafts supplies are probably even more extensive than math and reading resources. They carry everything from basic art supplies through resources for ceramics, airbrushing, sculpture, and matting and framing.

Science resources were the reason I first started ordering from Nasco. They carry so many dissection resources that they list “dissection materials” as its own category in their menu rather than under science. They carry microscopes, lab equipment, and chemicals as well as science kits, and games. But they also sell other less common items such as rocketry supplies, soil testing kits, and electrical supplies.

Nasco caters to traditional classrooms rather than homeschoolers. That means that many resources are sold in sets for large numbers of students rather than for only one or two—these products might be great for homeschool co-op groups. Still, there are plenty of items sold for individual and family use. Their huge selection of resources makes this a website that you will want to bookmark for frequent reference.

Nasco Up to 75% off Special Education Clearance

Up to 75% off Special Education Clearance at Nasco