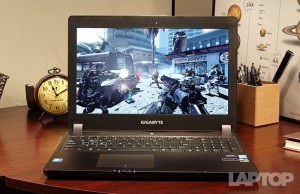 If the Gigabyte P35X v3 (priced at $2,279) were judged on looks alone, it would be a 3 on scale of 10. However, with laptops, as with most things, it’s what inside that counts. And this gaming notebook’s guts make the 15.6-incher a stunner. Outfitted with an Intel Core i7 processor and an Nvidia GeForce GTX 980M GPU, the P35X is all about impressive performance. Throw in a super-high-resolution display and great battery life, and you’ve got one of the most powerful 15-inch notebooks on the block.

If this were a teen movie, the P35X would be the frumpy best friend that’s desperately in need of a makeover. The black aluminum chassis is about as bland as they come, with only a shiny chrome Gigabyte logo to add any semblance of panache on the outside.The inside isn’t much better; the oval-shaped speaker grilles and silver power button are the only things that stand out.

The P35X’s rounded corners are nice, but the overall presentation is something I’d expect from a budget notebook, not something that costs more than $2,000. For the money, I’d much rather have the beautiful HP Omen and all its alluring angles.

The P35X has a seriously lovely display. Its 2,880 x 1,620-pixel panel produces rich colors. In the Focus trailer, Will Smith’s spearmint sweater popped against the actor’s warm brown complexion and the nearby deep-red umbrellas. Details were crisp enough to see the vertical ribbing in Smith’s shirt as well as the outlines of the actor’s chest in the rather taut garment.

The display also held up well during gaming. I enjoyed crystal-blue skies and lush green vegetation as I made my way through Kyrat in Far Cry 4. I was impressed with the level of detail, which allowed me to see the individual hairs on a clouded leopard’s hide as I made quick work of skinning it.

The laptop performed well on the sRGB Gamut test, which measures color reproduction, scoring 105.2 percent. That’s well above the 84 percent mainstream average. The HP Omen was a respectable 98 percent, while the MSI Dominator Pro delivered 89 percent.

If you ever wondered what disappointment sounds like, look no further than the P35X’s bottom-mounted speakers. As I listened to Janelle Monae’s “Ghetto Woman,” my ears were buffeted with loud, tinny highs and barely there lows. The singer’s usually radiant soprano fell flat.

My gaming experience was just as bad. I blew up a large truck with an RPG, only to be greeted by a neutered boom. It was sort of like lighting an M-80 only to discover it’s a bang snap.

The P35X hit 85 decibels on the Laptop Mag Audio Test, which is a notch below the 86-dB average. It was better than the Omen’s 78 dB, but not enough to conquer the Dominator Pro’s boisterous 93 dB.

What the Gigabyte P35X v3 doesn’t have in looks, it makes up for in power. Thanks to its Nvidia GeForce GTX 980M graphics card with 8GB of VRAM, the laptop is built to deliver inordinately high frame rates. When I played Far Cry 4 on ultra settings at 2,880 x 1,600 pixels, the laptop delivered an impressive 65 fps. Downgrading to high settings raised the frame rate to 80 fps.