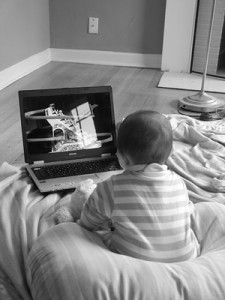 In today’s competitive world, some parents are trying to give their children a leg up before those little legs can even walk.

The rush to stimulate the intellects of the pre-verbal set has created a 2.8 million dollar market for toys, flashcards, CDs, and videos that suggest—if not promise—that their use will boost your baby’s or preschooler’s I.Q.

Not so fast, says Rick Gilmore. “Scientists know more about how to detract from normal development than how to enhance it. Poor nutrition, drug or alcohol use during pregnancy, severe neglect or abuse are the main factors that impair brain development, as most parents already know,” Gilmore adds.

Gilmore, a Penn State associate professor of psychology, studies infant brain and behavioral development and believes that the “smart toys” fad is based more on wishful thinking than on data. “There is little strong evidence,” says Gilmore, “that particular baby toys or activities can really enhance intelligence.”

Some believe otherwise. In the 1990s, U.C. Irvine physicist Gordon Shaw and cognitive development expert Frances Rauscher sparked a controversy with their claims that exposure to music by Mozart can enhance human spatial reasoning and memory—the now-famous “Mozart effect.”

Explains Gilmore, these findings were reported worldwide and Mozart sonatas (particularly the Sonata for Two Pianos in D Major used in the Irvine study) started turning up in “I.Q. building” baby toys and videos. In 1998, Georgia’s then-governor Zell Miller even started issuing a classical music CD to every child born in the state.

While Gilmore allows that listening to Mozart is an enjoyable activity, he cautions that most researchers have not been able to replicate the brain-enhancing results of the original study. “Whether or not music enhances the brain seems less important to me than the fact that music of all kinds, from Mozart to Miles Davis, enriches the soul.”

Despite the critics, products such as those from The Baby Einstein Company (a subsidiary of Disney since 2001) are flying off store shelves. The Baby Einstein series, packaged as “music-focused developmental tools to stimulate babies’ brains,” includes videos titled Baby Bach, Baby Van Gogh and Baby Newton that combine colorful visuals, simple words, and images of real animals with a classical music soundtrack.

Fans of videos such as these describe them as riveting for babies as young as two months old and a godsend for busy parents. But experts caution that overdependence on television entertainment—even of the “brainy” variety—can create its own problems.

“Kids learn from interacting with us, whether it’s watching a program together or taking a walk and talking about what we see,” emphasizes Gilmore. “No toy or video can take the place of that essential human interaction.”

The American Academy of Pediatrics bucks today’s trend with its recommendation that children under two not watch television at all. Despite this, “49% of parents think educational videos…are very important in the intellectual development of children,” reports a 2005 study from the Kaiser Family Foundation.

“Whatever you choose to do,” Gilmore advises, “make sure the activities are fun for your baby and you to do together.” But if you choose not to buy into this popular fad, he adds, “don’t worry that you are somehow limiting your child’s potential.”