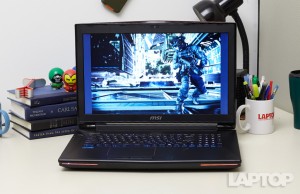 The Dominator returns. With the arrival of Nvidia’s powerful new Maxwell graphics, MSI’s gaming laptop series has undergone a significant internal refresh, creating the GT72 Dominator Pro (starting at $1,799, configured at $2,999). In addition to its Nvidia 980M GPU, this laptop features four — yes, four — blistering-fast SSDs, excellent audio and one of the better customizable keyboards on the market. It’s a potent combination that’s well worth the splurge, but the display doesn’t quite shine

The Dominator Pro isn’t the prettiest laptop I’ve seen, but I wouldn’t kick it out of my bed or off my desk. The laptop’s black, brushed-aluminum lid is subtly handsome; I’m particularly a fan of the red backlit emblem in its center, which mimics a coat of arms.

In an attempt to look like the cool kids, MSI stole a page from Alienware’s brightly colored playbook and added a pair of LED strips to the front lip of the notebook. On the bottom of the GT72, you’ll find a large set of blood-red vents. It’s a nice try, but the overall execution is a tad clumsy for my taste. I prefer the come-hither looks of the ASUS G751JY, particularly with its use of aluminum, soft-touch finish and sexy red accents.

MSI applied a slightly more restrained approach to the interior, covering the majority of the deck in black aluminum. If you look closely at the speaker grille at the top of the deck, you’ll notice shiny, red plastic stashed away beneath the aluminum. Buttons for power, GPU, Fan, XSplit GameCaster and the SteelSeries Engine control panel are located on the left side of the keyboard deck.

In its default blue lighting, the keyboard looks like a shimmering sea, and as on many MSI laptops before it, gamers can tweak the colors to whatever they choose. The palm rest is slightly raised and made of a black pseudo glass, and the touchpad is demarcated by thin LED lights.

MSI is slipping on the display front. While its 17.3-inch 1080p display is by no means bad, it’s not as bright or colorful as its competitors.

When I compared the MSI against the ASUS G751JY using the 1080p The Wedding Ringer trailer, the GT72 initially looked better. During the park scene, the MSI initially had more realistic color, including better representation of reds. I had no problem distinguishing the candy-apple red of the park bench from the darker red of the blue awning supports.

However, once I used the ASUS Splendid Utility software to adjust the color calibration, the ASUS emerged as the winner. The G751JY also had a sharper picture and better contrast, showing off the three stains on the concrete near the garbage cans. The G751JY continued to serve up richer color and sharper detail in the lush coastal savannah in the Num area of Middle-Earth: Shadow of Mordor.

Color accuracy and reproduction tests confirmed my observations. The GT72 reproduced only 88.5 percent of the sRGB gamut — well below the 97.2 percent desktop-replacement average and barely beating the Krypton’s 88.4 percent. The G751JY and Alienware 17 hit a higher 99.1 percent and 106 percent, respectively.

On the Delta-E test, which measures color accuracy, the GT72 produced a dismal 10.3 (0 is a perfect score). Once again, the Krypton was only slightly better, at 10.2. The G751JY managed a much better mark of 2, while the Alienware 17 delivered a near-perfect 0.6.