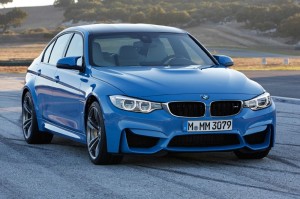 The 2015 BMW M3 and M4 are finally here. Although the looks of the latest M-cars don’t come as too much of a surprise given the BMW M4 Concept from earlier this year, we do now know that the M3 and M4 will produce 425 horsepower and 406 lb-ft of torque from a 3.0-liter turbocharged six-cylinder engine.
Reflecting the recent split of the BMW 3 Series lineup into 3 Series sedan and 4 Series coupe models, the legendary M3 nameplate gains a companion in the 2015 BMW M4. Don’t be fooled by the slightly disparate sheetmetal and nomenclature, though, as the 2015 BMW M3 sedan and M4 coupe are essentially the same machine under the surface. Both models display an exterior package typical of most M cars with the bulging hood, front fender vents, aggressive lower air dams, and a rear diffuser. The interior of the M3 and M4 display similar upgrades over standard 3 Series and 4 Series models, with a new instrument panel, steering wheel, gearshifter, sport seats, contrasting stitching, and BMW M logos throughout.

When the previous generation of the BMW M3 transitioned to a V-8 engine, many cried out the larger, heavier engine would dilute the character of this agile, lightweight performance car. Although that proved to be an invalid concern, BMW returns to six-cylinder power for the 2015 BMW M3 and M4. This 3.0-liter turbocharged engine bumps power by 11 hp over the V-8 M3 for a total of 425 hp at 5500 rpm. Even more significantly, the turbocharged six-cylinder offers a big torque bump of 111 lb-ft over the V-8 for a total of 406 lb-ft which is available as low as 1850 rpm.
BMW says that this engine will shoot the M3 and M4 from 0-60 mph in 3.9 seconds when equipped with the DCT seven-speed dual-clutch transmission. Purists need not worry, though, as a traditional six-speed manual will still be offered as standard equipment. Thanks to the turbocharged engine along with weight savings of around 400 lbs. over the previous M3, the new model is expected to return 25 percent better fuel economy with that increased performance. Numerous carbon-fiber-reinforced-plastic, aluminum, and carbon fiber body panels along with the smaller, lighter engine make for a curb weight of 3300 lbs. for the 2015 BMW M4 coupe compared with the outgoing M3 coupe’s 3704 lbs.
We look forward to seeing what this lightweight construction means for the 2015 BMW M3 and M4’s handling chops. The BMW M3 and M4 remain rear-wheel-drive, and both will make use of a new Active M limited-slip-differential in the rear to optimize the amount of power going to each rear wheel. Like other recent M cars, the M3 and M4 will offer numerous customizable driver settings for the stability control, steering feel, damper stiffness, and throttle response which fit into Comfort, Sport, and Sport + modes. For those concerned that the turbocharged inline-six won’t provide as sporty of an exhaust note as the outgoing V-8, the 2015 M3 and M4 will feature customizable sound profiles that can open and close flaps in the exhaust to enhance the engine note.
Based on our first ride in a BMW M4 prototype that gave a glimpse at the car’s “agile, eager, and responsive” nature, we can’t wait to get behind the wheel of the latest M-cars. Until then, The 2015 BMW M3 and M4 will make their official debuts at the 2014 Detroit auto show in January before going on sale in the U.S. starting in early summer 2014.