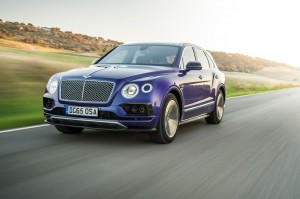 Marbella, Spain — The voice from the passenger seat of the 2017 Bentley Bentayga SUV is stern. “Would you drive as hard as this if it was your own vehicle?”

No, Bentley chief Wolfgang Dürheimer is not amused as smelly drifts of smoke billowed from all four wheelhouses. “Better take it to the next village and back for a cooldown drive.”

Yessir. A few clicks down the road, the brakes begin to recover. The pungent pad perfume evaporates as the crackling caused by slow dissipation of heat dies away, and resistance returns to the no-longer-spongy pedal. But there is no smoke without fire, and in this case the fire is lit at random by the 5,379-pound curb weight of Bentley’s first foray into off-road territory. Measuring 202.4 inches long and 87.5 inches wide when measured to the edge of its exterior mirrors, the Bentley Bentayga  harbors and consumes plenty of acceleration and deceleration energy.

“Because the carbon-ceramic brakes are not quite production-ready yet,” admits senior engineer Rolf Frech. “But we are on the case, and I can assure you the upgrade will perform to everyone’s satisfaction Indeed, earlier in the day, we pushed the brakes to the brink of self-destruction on more than one occasion. Perhaps Dürheimer should have taken the smoke signals as a compliment: After all, steaming anchors are almost always unmistakable proof the driver was having fun — in this case, a lot of fun. Corner by corner, however, the pedal travels closer and closer to the firewall, and the initially sharp braking-bite begins to give way to a determined but less fierce hold. And though we stuck to the ambitious fast-forward rhythm and pace, the speed barge never shot past an apex or ran out of road. This surprisingly benign attitude at the limit is to a large extent masterminded by an active body-control system dubbed BDR for Bentley Dynamic Ride..”

“Unlike other mostly hydraulically operated applications, BDR is powered by small electric motors, which respond a lot faster,” Frech says. “Since BDR saps a fair bit of energy, the Bentayga is fitted with a supplementary 48-volt electrical system. In combination with the air suspension and the adjustable dampers, the modular anti-roll bars are essential to ensure best-in-class vehicle dynamics and controllability.”

Like Porsche’s Cayenne Turbo S and BMW’s X6 M, the high-roof Bentley prioritizes g-force, grip, and torque. Despite its stance, its imposing proportions, and the grandma-would-love-it details, the Bentayga is a fast, involving, and proper driver’s car. Thanks to BDR, turn-in is sharp and devoid of irritations such as excessive body roll, early understeer, and a momentarily wayward rear end. Even when cornering along the limit of adhesion, the heavyweight SUV remains flat and composed, stable and attentive. Suffering from the devil at the wheel are not only the brakes but also the tires: Pirelli’s finest foursome returned to the garage at night with scrubbed tread and ragged shoulders.

Speaking of rubber, the 285/45R-20 Pirellis felt about right for the mixed bag of Spanish country roads and motorways. According to a Bentley mechanic, the standard 20-inchers look too petite while the butch 22-inchers are too vulnerable. Although the Bentayga beats any direct rival in terms of ride comfort, its chassis does not feel quite as compliant as the latest Audi Q7. How come? Well, to reach 187 mph without disintegrating requires, among other things, tires with extra-stiff sidewalls and a taut suspension tuned for unerring stability.
Most owners could probably live without the swarm of pricey assistance systems, but the aforementioned BDR (standard only in North America) is absolutely essential. We know this because a software glitch deactivated the system intermittently, converting the agile and sure-footed crossover to an indifferent and ponderous colossus. On the positive side, the competent variable-rate steering is linear, precise, and responsive. The progressive and well-balanced tuning is an important confidence-inspiring tool.