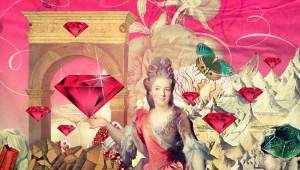 TUCSON — Alfred Jiang, a young Chinese entrepreneur, clutched a gemological report as he made the rounds of this city’s convention center during the gem shows last month.

The report, issued by the Gubelin Gem Lab in Hong Kong, served as a proxy for a stone Mr. Jiang’s parents were holding for safekeeping in Beijing: a free-form ruby crystal of 424.84 carats, about the size of a tangerine.

According to Mr. Jiang, the ruby is an heirloom that has been in his family for more than three generations. He was in Tucson to find someone who could help him establish a value for the specimen, and lead him to a potential buyer.

A gem specialist that Mr. Jiang consulted in Thailand told him the crystal could be worth as much as $100 million, but other people had given contradictory appraisals, and Mr. Jiang was at loose ends. “I don’t know who I can trust and who I cannot,” he said.

His frustration was justified. As the custodian of a giant crystal Gubelin described as “natural corundum”— the mineral family to which both ruby and sapphire belong — with an origin of “Burma (Myanmar),” Mr. Jiang was looking at a potential windfall. That the stone bore “no indications of heating” was the cherry on top. Heating rubies to remove traces of bluishness, thereby enhancing the red, is an age-old practice. The technique is so prevalent that unheated rubies now fetch a considerable premium due to their rarity.

For the 27th Biennale des Antiquaires in Paris last September, Cartier used a 15.29-carat Mozambican ruby at the center of its Reine Makéda necklace. Credit Nils Herrmann © Cartier
On his second day in Tucson, Mr. Jiang was introduced to Stuart Robertson, research director for Gemworld International, a publisher of pricing and market information.

After studying the report, Mr. Robertson said there was at least one red flag (no pun intended) he felt compelled to mention.

In a business driven by the desire to maximize sparkle, “the economics are very simple,” Mr. Robertson explained. “If the crystal had potential, it would not be a crystal, it would be a cut stone.”

Such is the cold calculus of the gem trade — especially when the specimen in question is a colossal ruby. Name-checked in the Bible, ancient Sanskrit texts and “The Travels of Marco Polo,” July’s birthstone has long been considered the king of precious stones. In the hierarchy of the trade, no gem commands more money, earns as much respect or spawns as many imitations.

With a hardness of nine on the Mohs scale, second only to diamonds, rubies boast one of the key requirements for a gem: durability. It is their fabled beauty, however, that has captivated history’s biggest collectors, from Mughal emperors to modern-day captains of industry.

Natural unheated specimens with a Platonic red hue are more sought after than diamonds — and exponentially more difficult to find.

“If you said to me, ‘Rahul, find me a 10-carat D flawless diamond,’ I’d probably call you with six stones in 48 hours,” said Rahul Kadakia, international head of Christie’s Jewelry. “If you said, ‘Find me a 10-carat gem-quality Burma ruby, maybe I’d call you in six months, but maybe I wouldn’t.”