If it’s zoom you want, it’s zoom you’ve got. So declares Canon with the release of its Powershot G3 X, a brand spanking new compact shooter equipped with 25X optical zoom with a 24-600mm field of view equivalent to 35mm. Not content to let the zoom be its only selling point, the camera also brings five-axis image stabilization – perhaps making it all the easier for pros and amateurs alike to capture crisp, blur-free images from long distances. 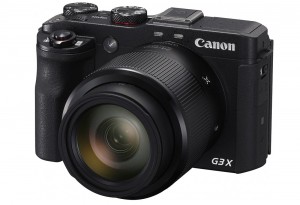 Housed in a dust- and water-resistant body that imbues it with a touch of rugged durability, the G3 X boasts a sizable one-inch, 20.2 MP high-sensitivity CMOS sensor with an ISO range of 125-12,800. In combination with the sensor comes a proprietary DIGIC 6 Image processor that Canon claims will capture highly detailed snapshots and video in low light.

The camera also includes a 1-point High Speed AF system and is capable of continuous shooting at speeds up to 5.9fps. It also contains a 3.2-inch multi-angle LCD screen and a 2.36MP resolution electronic viewfinder.

1080p Full HD video is captured at speeds up to 60fps in MP4 format. Sound recording is facilitated via external stereo mic jack. There’s also a headphone jack useful for monitoring during recording, in addition to the ability to manually control audio levels. An HDMI output allows for live monitoring of video as it’s recorded. The HDMI can also be used to plug the camera directly into an HDTV.

Other bonus features include built-in Wi-Fi for immediate photo and video sharing across various social media channels, and Star Mode which can be used to snap stills and time-lapse video of overhead heavenly bodies.