The Oppo PM-1 arrived in a box large enough that I was convinced they had shipped their new HA-1 Headphone Amp with the headphones (not scheduled to ship until the end of the month). They hadn’t. The PM-1 headphones are treated like royalty by Oppo. They come triple-boxed, the last one being a large, glossy, wood case that would be right at home full of expensive cigars. The box is gorgeous if on the large side. Oppo has included a carrying case that felt like it was made out of denim. The carrying case has molded sides but it is essentially a soft case. You wouldn’t want to throw the PM-1 headphones around and expect that this case would protect them. 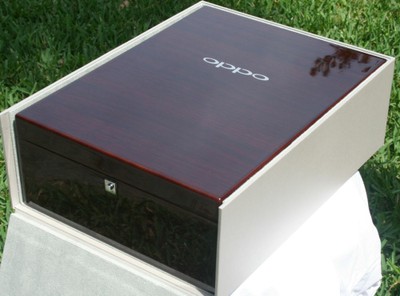 The Oppo PM-1 headphones came with a number of accessories. The normal perforated leather earcups were removable and Oppo included a second set that was covered in black velour. The earcups attached by small, plastic binding posts and had a small cutout for the 2.5mm input on each earphone. Both were equally comfortable though the opening for your ear was on the small side. I have smallish ears so it wasn’t a problem for me, but I could see it being an issue for people with larger ears. An over-ear headphone shouldn’t have a problem covering an ear and I can envision some people having trouble.

The backs of the PM-1 headphones have a grille that allows sound out. This is common for planar and electrostatic headphones and even some headphones with dynamic drivers. Most planar headphones employ a good amount of dampening and the PM-1s do as well. Sound leakage was evident, as you would expect, but not nearly as loud as I expected. You won’t want to use these on a train or airplane but it isn’t as if the sound from outside the headphones is the same volume as inside.

The Oppo PM-1 headphones came with two cables. In the box was a three-meter cable that terminated in a 1/4″ plug. This is perfect for AV Receivers and some headphone amps. These days, every portable device and many other devices are utilizing the smaller 3.5mm plug. Case in point – the Emotiva Stealth DC-1 external DAC and headphone amplifier. This devices has not one but two 3.5mm outputs for your headphones. Oppo has included a second cable that terminates in a 3.5mm plug, but it is only one meter long.

One meter long is comically short. Most headphone cables are at least two meters. One meter didn’t quite reach to my knee and I’m not a tall guy. One meter would reach to the headphone jack of my laptop if it was on my lap, but not if it was on my desk. I would question if a one-meter cable would be usable for any portable device that was NOT strapped to your arm. The quality of the cables was also dramatically different. The 3.5mm cable was PVC coated, thin, and pretty unremarkable. The 1/4″ cable had thick cables, a tech-flex jacket, and seemed like the highest quality. Oppo was sending a clear message about which connection type they thought you should be using. 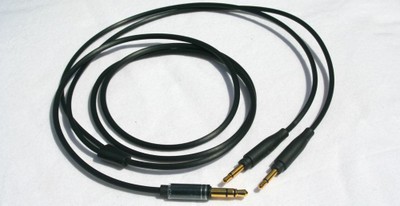 The PM-1 headphones weigh 14 ounces (395 grams) without the cables. I’m sure there are people right now that are complaining on forums about how heavy that is but I didn’t find them at all uncomfortable. The clamping pressure it 5 N (Newton), which works out to just over 1 pounds-force. The clamping pressure is tight enough to keep the headphones steady, even when you turn your head quickly, but not so tight as to create pain over longer listening sessions. The band on the top is well padded and is as comfortable as any I’ve used.

Oppo has used a lot of metal with the PM-1 headphones and they look really great. The slide mechanism clicks into place with each adjustment and holds firm without being hard to manipulate. My smallish head required a little extra room from the slide but there was plenty left for people with larger noggins. There is a unique serial number on the right slide, further conveying the sense of quality about the PM-1 headphones.