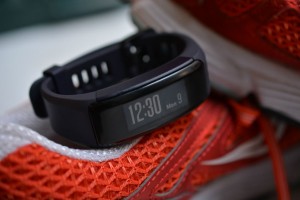 Garmin is serious. The most dedicated outdoorsmen and athletes look to its rugged products for tracking everything from laps in the pool to dangerous hikes in remote places. Now the company is getting more serious about heart rate with the $150 Vivosmart HR, its first wristband activity tracker with a builtin optical heart rate monitor that the company developed itself. It sports many of the features Garmin put into its other all-purpose trackers, including step, distance, calorie, and sleep tracking, smartphone notifications, and music and action cam controls. It all connects to the newly redesigned Garmin Connect app.

Other than the heart rate monitor, there’s nothing outstandingly new about it. However, the Vivosmart HR is a necessary product for Garmin. Not only will it compete with the forthcoming Polar A360, but, more importantly, it’s going after Fitbit’s $150 Charge HR with a comprehensive set of features that both novices and hardcore athletes will appreciate.

The Vivosmart HR looks like a marriage of the Vivosmart band and the Vivofit 2. It has a module with a 1.00 x 0.42-inch,160 x 68-pixel touchscreen that sits atop the wrist, with a single physical button on the right side of it. It’s embedded into a flexible, silicone band that mimics a regular watch strap, but this has rectangular notches rather than tiny holes. That subtle change makes it super easy to adjust and fasten, so you can make it as loose or as tight as you want depending on when you’re wearing it (you’ll want to have it on pretty tight when you plan on using the heart rate monitor heavily).

On the underside of the device is the optical heart rate monitor and the four tiny nodes for charging. The charging cable has an odd fastener on it that you have to fit the band into in order for it to power up via USB. The nodes are not magnetic either, so I often had to fiddle with the charging cable before I finally snapped it into place correctly.

Despite the display’s basic, monochrome style, I really liked it. The numbers that show the time digitally are big and easy to read, and the entire display is super clear in direct sunlight as well. In the Garmin Connect app, you can choose if you want its blueish backlight on always, never, or only during activity and when tapped. I found myself wishing the backlight was brighter, but that’s an issue most Garmin devices have had for ages. It also times out pretty quickly if you have it set to only turn on when woken by a tap or activity tracking, so I would suggest keeping it always on if you have eye troubles.

The Vivosmart HR is water-resistant up to 5 ATM, or about 50 meters. That’s better than the comparable Fitbit Charge HR, which is only splash-resistant. The band is supposed to last up to five days on a single charge, and my band was down to about 20 percent battery during my fourth day of use.

Setting up the device is simple enough: just download the Garmin Connect app and follow the pairing instructions after you sign in or create an account. The Vivosmart HR pairs via Bluetooth to your Android or iOS device, and it does so during setup from within Garmin’s app rather than in the Bluetooth settings on your smartphone. I didn’t have an issue setting up the device, but it did have occasional syncing issues. You can initiate a sync by opening up the app or by tapping the sync icon on the band; sometimes the band wouldn’t automatically sync when I opened the app.

A Garmin representative told me to update the Vivosmart HR’s software to see if that would fix the problem. To do so, you must connect the device to your computer via its USB charger and sync it with Garmin Express, which you can download from Garmin’s website. It’s basically a device management system that is mostly good for software and firmware updates. Sure enough, my Vivosmart HR needed to be updated to the most recent software, and after I did so, it synced to the app quickly and easily. (I should also mention that Garmin was doing maintenance on its Connect app while I reviewed the Vivosmart HR. This slowed me down as it disrupted syncing, but after the maintenance was finished, things went back to normal.)