Those who travel with their tech know one of the biggest downfalls of living in a mobile world: You need a charger for everything. Your laptop, tablet, e-reader, smartphone, camera, smartwatch and headphones all have their own chargers. Whereas your mobile devices charge via USB, most laptops require their own proprietary power bricks. If you’re willing to pay its premium price, the $99 Zolt Laptop Charger Plus can lighten that load by cramming a notebook connection and two USB charging ports into its svelte, 0.2-pound package.
article continued below

Apart from the FINsix Dart, which isn’t available yet, and certain netbook/Chromebook chargers, the Zolt Laptop Charger Plus is the smallest laptop power brick on the market. Upon first holding it in my hand, I wondered how the tiny cylinder could power one device, let alone three. At 3.66 inches long and 1.33 inches wide, it fits easily in a pants pocket or bag. In comparison, a 45-watt MacBook Air charger measures 2.56 inches on both sides and is 1.1 inches wide. The 65-watt adapter for the Lenovo ThinkPad Yoga 14 was more than half an inch longer, and almost half an inch wider, than the Zolt.

Its octagonal, cylindrical design is playful and attractive. Our review unit came in a subtle graphite color, but the charge is also available in a more vivacious electric orange and a classy ultra violet. One of the Zolt’s eight sides features three standard USB ports stacked vertically. Though it can charge USB devices as well, the top port is meant specifically for a laptop and comes with a special cable that hooks into it. The other two ports use your existing cables to charge smaller devices like smartphones, tablets and cameras. The charger’s octagonal design is also perfect for wrapping a cable around it; the edges help cables curve naturally around it.

Zolt Charger Compared to a Dell and Mac charger

The 70-watt Zolt came in at just 0.22 pounds on our scale and 0.36 pounds with a laptop charging cord attached. Compared to the competition, it’s light as a feather. In comparison, a 45-watt MagSafe 2 power adapter for a MacBook Air weighs 0.44 pounds, and a 65-watt charger for the Lenovo ThinkPad Yoga 14 weighs 0.64 pounds. Power bricks for laptops with larger screens or discrete graphics cards weigh even more (though those will support high-power gaming laptops that the Zolt can’t).

This charger has a few really neat tricks up its sleeve that add to its portability and ease of use. Its AC prongs fold into the unit, much like those on Apple’s MacBook and iPad adapters. This prevents the prongs from being damaged while in transit and, in the case of the already-compact Zolt, makes it easier to pack it into a purse or pocket.

The unit’s body rotates 90 degrees around its frame, which makes it easier to access the ports when you’re plugged into a tight space on an outlet or power strip. I was able to get my USB cables in easily around a bulbous power adapter for an alarm clock.

The charger comes with a 6-foot charging cable with eight interchangeable tips to fit a variety of laptops. Our review unit had a guide that included which heads to use for Acer, Asus, Dell, Fujitsu, Gateway, HP, Lenovo, LG, MSI, Samsung and Toshiba laptops, though Zolt’s website and compatibility checker suggest it will work with many more brands. Adapters for MacBooks are sold separately for $19.99 apiece.
Compatibility

Zolt suggests that the Laptop Charger Plus and its interchangeable heads will work with 90 percent of laptops on the market. The suggested head for my work-issued laptop, a Dell Latitude 430u, fit perfectly, as did the L-shaped power adapter for my MacBook Pro.

When I went through the tips, looking to charge a Lenovo 100S Chromebook that I have been testing, there wasn’t a plug that fit it. It was part of the 10 percent. Zolt does offer a compatibility checker on its website, though it doesn’t include a number of models (including the 100S Chromebook). Zolt told us that it will “appraise and update” the checker on a monthly basis. It also didn’t fit another Lenovo we had lying around the office, the Ideapad 100S, which uses a different tip than its Chromebook counterpart.

There is currently no cable available for USB Type-C connectors. At the moment, laptops with these connectors are few and far between (Apple’s 12-inch MacBook and Google’s Chromebook Pixel spring to mind), but the new charging standard is expected to grow quickly. If your laptop, smartphone or other device uses USB Type-C, then you will have to wait for the next model of this charger. Zolt told us that more news about that product will be coming in early 2016.
Performance

I was able to charge a MacBook Pro, iPad mini 2 and pair of Sony Bluetooth headphones simultaneously and without issue. When the headphones were done, I subbed in my smartphone, without missing a beat. The Laptop Charger Plus has a power output of 70 watts, which should handle most laptops, except those with powerful components used for gaming. The maximum that can be used for the laptop charging port is 65 watts. 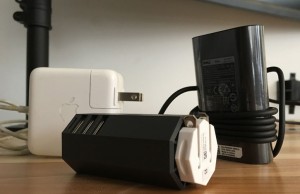 The charger uses what Zolt calls “efficient resonant control” to direct power to devices while staying in line with manufacturer standards. If your laptop is eating up too much power, the charger will prioritize your mobile devices.
Cost-Benefit Analysis

The one thing about the Zolt Laptop Charger Plus that may give consumers pause is its $100 price tag. AC adapters from laptop and mobile device makers may only charge your laptop, but they are also substantially cheaper. If you needed to replace the aforementioned power adapter for the Lenovo ThinkPad Yoga 14, it would run you $54.99 if you purchased it directly from Lenovo.

One of the most substantial benefits is having one charger that works with different laptop brands. I charged my work-issued Dell and my personal MacBook, all with the same power brick. This may be among the smallest and lightest laptop chargers, but there are other, cheaper universal laptop chargers, like the $59.99 90-watt iGo Compact Universal Laptop Charger and a $69.99 package from Targus that includes a 90-watt universal laptop adapter and a charger for a mobile device. 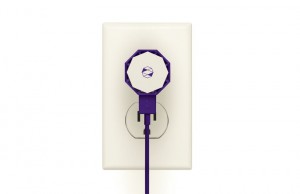 Still, the Zolt charges two mobile devices in addition to a laptop — something power bricks from laptop and mobile device makers just don’t do. It’s also smaller, lighter and more attractive. You will have to look at how much that extra functionality and light weight are really worth to you when considering your purchase.
Bottom Line

The Zolt Laptop Charger Plus lives up to its promises. Small? Check. Light? Check. Charges a laptop and two mobile devices simultaneously? Check. It does everything your laptop charger does and more. 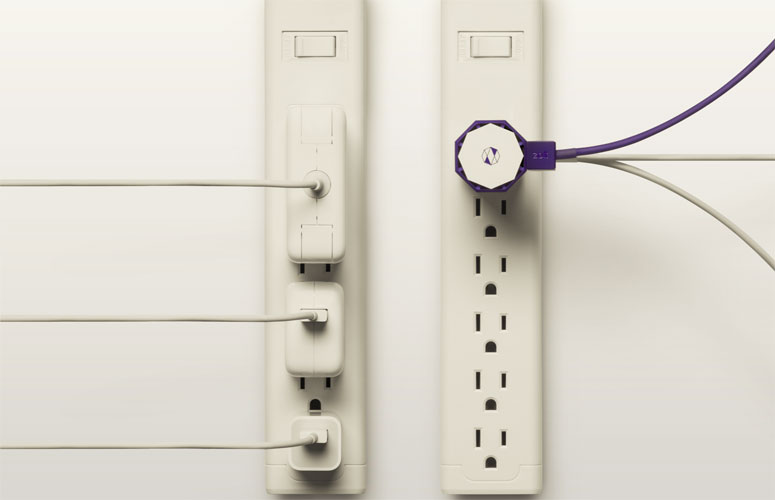 There’s no doubt you can save money if all you need is a backup power brick or a USB charger for your phone and tablet. However, if you’re willing to spend $99 (or more for Mac), you will see a tangible benefit in your mobile life, as you’ll need to carry only one, lightweight charger in your bag rather than several bulky ones. Your wallet may scold you, but your back will thank you.