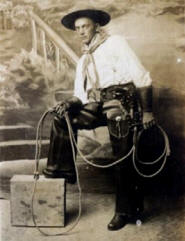 There is probably no working attire that is as specific as that of the cowboy.  Each article of clothing serves a purpose.  Following is an excerpt from the book “The Passing of the Frontier” by Emerson Hough that gives a very accurate description of 1800’s cowboy clothing and gear.

“By the costume we may often know the man. The cowboy’s costume was harmonious with its surroundings. It was planned upon lines of such stern utility as to leave no possible thing which we may call dispensable. The typical cowboy costume could hardly be said to contain a coat and waistcoat. The heavy woolen shirt, loose and open at the neck, was the common wear at all seasons of the year excepting winter, and one has often seen cowboys in the winter-time engaged in work about the yard or corral of the ranch wearing no other cover for the upper part of the body but one or more of these heavy shirts. If the cowboy  wore a coat he would wear it open and loose as much as possible. If he wore a “vest” he would wear it slouchily, hanging open or partly unbuttoned most of the time. There was a reason for this slouchy habit. The cowboy  would say that the vest closely buttoned about the body would cause perspiration, so that the wearer would quickly chill upon ceasing exercise. If the wind were blowing keenly when the cowboy  dismounted to sit upon the ground for dinner, he would button up his waistcoat and be warm. If it were very cold he would button up his coat also.

The cowboy’s boots were of fine leather and fitted tightly, with light narrow soles, extremely small and high heels. Surely a more irrational foot-covering never was invented; yet these tight, peaked cowboy  boots had a great significance and may indeed be called the insignia of a calling. There was no prouder soul on earth than the cowboy . He was proud of being a horseman and had a contempt for all human beings who walked. On foot in his tight-toed boots he was lost; but he wished it to be understood that he never was on foot. If we rode beside him and watched his seat in the big cow saddle we found that his high and narrow heels prevented the slipping forward of the foot in the stirrup, into which he jammed his feet nearly full length. If there was a fall, the cowboy’s foot never hung in the stirrup. In the corral roping, afoot, his heels anchored him. So he found his little boots not so unserviceable and retained them as a matter of pride. Boots made for the cowboy  trade sometimes had fancy tops of bright-colored leather. The Lone Star of Texas was not infrequent in their ornamentation.

The curious pride of the horseman extended also to his gloves. The cowboy  was very careful in the selection of his gloves. They were made of the finest buckskin, which could not be injured by wetting. Generally they were tanned white and cut with a deep cuff or gauntlet from which hung a little fringe to flutter in the wind when he rode at full speed on horseback.