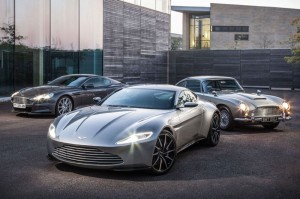 What does James Bond drive? An Aston  Martin, of course. That the first of Ian Fleming’s Bond books actually featured a Bentley is inconsequential, as is the fact that the 24-film franchise has had the spy in everything from an AMC Hornet to a Toyota 2000GT. James Bond drives an Aston Martin, and that’s that.

The torrid affair between the British institutions—which began in 1959 when Bond drove an Aston Martin DB3 in the book “Goldfinger” and was solidified five years later when the film version debuted with Sean Connery behind the wheel of a DB5—is fierier than ever. So on the eve of the release of “Spectre,” the latest film in the series, we decided to celebrate the inexorable bond between the man and his machines at Aston Martin’s headquarters in Gaydon, England. Laid out before us were the three most important Bond cars of all time: the 1965 Aston Martin DB5, the 2007 Aston Martin DBS, and the all-new, hauntingly sexy DB10, “Spectre’s” hero car and the first model Aston Martin has ever built exclusively for the series.

We start our day by sliding into the ribbed black leather driver’s bucket of a DB5, which has starred in six Bond films. We rub our thumbnail along the top edge of the small teardrop-shaped shift knob hoping to find our favorite Q Branch extra: the red ejector-seat button. Alas, this isn’t an original Bond DB5 stunt car from the ’60s but one of the cars that starred in the last film, “Skyfall.” It has a thin black outline on its roof of where the passenger seat would eject, but otherwise, it’s a stock and beautifully maintained DB5, one now worth a few million dollars thanks to its association with 007.

We pull down the tinted Plexiglas sun visor, run one hand along the rim of the wood-grain steering wheel with small metal rivets on its backside, and move the choke from normal to start while turning the small silver key in the center-mounted ignition switch with the other. The inline-six cranks for a few seconds before backfiring through its carburetors, shooting smoke out of its twin tailpipes and fretfully coming to life.

We reset the choke and tap the bare-metal accelerator pedal a few times. The 282-hp Tadek Marek engine coughs chaotically through the exhaust. We can’t imagine Pussy Galore or Domino Derval being turned on by black soot and backfires, but the way the DB5 drives still charms. It’s slow and timid by modern standards, yes, but also nimble and solidly constructed. Its wraparound windshield and delicate A-pillars let us see every inch of the front end and help us get close to the edge of the road as we buzz through corners. Maybe too close since wadding up a multimillion-dollar Bond car would be almost as bad as drinking a martini that’s stirred instead of shaken. We put the DB5 away as soon as the tires start to protest against our driving style. Aggressive driving is best saved for a correspondingly aggressive, modern-era car such as the Aston Martin DBS.

It was fortuitous that when “Casino Royale” debuted with Daniel Craig playing a much more assertive, physical Bond that Aston Martin had just built the DBS, the most brutal road car it had yet built. The DBS has starred in some of the franchise’s most adrenaline-soaked driving scenes—a dramatic, seven-roll crash in “Casino Royale” and the thrilling opening sequence of the follow-up film, “Quantum of Solace.”

We squeeze into the one-piece carbon-fiber seat of a DBS used for stunts and pull the four-point Sabelt harness over our shoulders. Mounted behind us, where a pair of half-seats used to be, are a fire extinguisher and silver racing helmet with “Daniel Craig” emblazoned on its side. We push the bulky metal shifter into first and take off. The 510-hp V-12 sounds gravelly but is remarkably smooth, and red lights on the dash come on as we near redline and shift to second. We’ve loved this car on film, but it sounds even better in person.