Don’t dismiss the HP Spectre x2 as yet another would-be Surface killer. Starting at just $800 ($1,149 as reviewed), the Spectre x2 is priced $200 less than the cheapest Surface Pro 4 for the same amount of storage and memory, and it includes a keyboard. (Microsoft charges $130 extra.) We also like the HP’s attractive metal deck and a commendable quad-speaker system. If it wasn’t for weak battery life, the Spectre x2 could have been the 2-in-1 to beat.

With the Spectre x2, HP takes on a detachable 2-in-1 design and does it in style. The tablet and keyboard are black, gray and silver with hints of polished chrome that complement each other without becoming distracting. The brushed metal is a pleasure to touch, and when you add its smooth, rounded edges, you have a system that’s hard to put down.
The detachable keyboard attaches via HP’s proprietary magnetic connector and features a solid metal back, which gives it a sturdier typing experience, especially on uneven surfaces like your lap.

In back, HP has put its own twist on the kickstand by switching out the big metal flap seen on Microsoft’s Surfaces for a gleaming, U-shaped loop that pops out from a similarly shaped recess. The problem is that when you want to use the kickstand, you need to press a superstiff slide release on the left side of the system. This annoying issue isn’t present on the more business-minded HP x2 Elite, which has a kickstand that you simply pull down.

Compared to more traditional 2-in-1s, Toshiba’s Satellite Radius 12 and Lenovo’s superslick Yoga 900 do their best to keep up. But both systems have a hard time matching the x2’s smaller size and weight.

On the Spectre x2, HP’s largest departure from the Surface formula takes places with the detachable, backlit keyboard. The exterior features a soft cloth cover, but on the inside, HP opts for a solid metal deck. This makes the keyboard feel much sturdier, while still allowing it to flip back when you want to use it in tablet mode.

When I was typing, there was a little flex in the keyboard, but it wasn’t enough to prevent me from hitting 82 words per minute on 10fastfingers.com’s typing test, which is on the high side of my typical 75- to 80-wpm range. Some people may get a little annoyed at the short 1.36-mm key travel (which is less than the 1.5-mm travel HP advertises), but the 55-gram actuation weight and crisp key feel made me completely forget about the keyboard’s short throw. 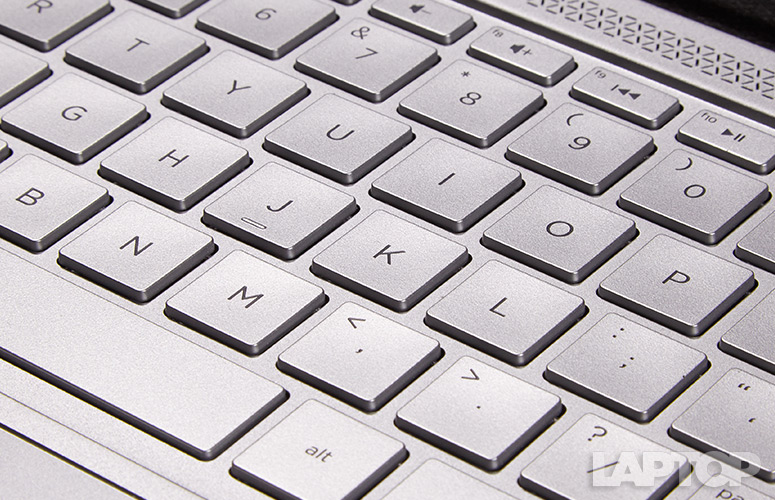 The Spectre x2 also continues HP’s recent trend of featuring superwide touchpads, with the one on the x2 measuring 4.75 x 2.25 inches. The surface is the same smooth brushed metal you get on the rest of the deck, and it was a pleasure to use both when clicking, mousing around or using multitouch gestures such as two-finger scrolling.

Those looking for a stylus to use with the x2 won’t find it in the box, although it is available separately for $50. The HP Active Pen features 2,048 levels of sensitivity, two buttons near the middle and a power button on top. However, since the x2 uses Wacom tech for its stylus support, you can save some money on a writing utensil by using a third-party stylus, too.

The 12-inch 1920 x 1080 touch screen on the Spectre x2 is bright and relatively accurate, but the picture doesn’t look as rich or colorful as panels on similar systems. When I watched the Star Wars: The Force Awakens trailers, I liked the sharp details in the shifting dunes of Jakku, but I missed the slight redness and more saturated colors that I was looking for in the sand and sky. 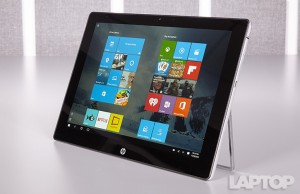 The big issue is the x2’s range of colors. On our test, the panel covered just 71.9 percent of the sRGB gamut, which left a big gap between it and its competition. The SP4 and Radius 12 both came in at 100 percent and the Yoga 900 wasn’t far behind at 93 percent.

The Spectre x2 starts with two Bang & Olufsen speakers built into each side of the tablet, but the real show starts when you attach the keyboard. That’s because there are two more speakers hidden behind the grille above the keyboard, which automatically turn on anytime the two parts are connected.

This presents a very engaging envelope of audio, which made listening to Madeon’s “You’re On” a delight when it treated me to crisp percussion and rich synthy mids. Still, like most ultraportables, the x2 could use a little more bass.

On Laptop Mag’s Heat Test (15 minutes of streaming HD video from Hulu), the Spectre x2 straddled our 95-degree comfort threshold with temps measuring 94.5 degrees on parts of its rear, with other spots reaching a slightly higher 96 degrees.

With the Spectre x2, HP has embraced the next wave of PC connectivity. That means instead of a traditional boxy USB Type-A port or micro USB, you get two slick new reversible USB Type-C ports (one on each side). Those not ready to switch to USB C will see this as a negative, since there isn’t a traditional USB port on the system for connecting your phone or printer, although HP does include an adapter in the box to help ease the transition.

Other ports include a microSD card slot for expandable storage, a microSIM slot for use with Verizon’s 4G LTE network and a combo headphone/mic jack. The USB C ports also double as video out, as long as you have the right adapter, with either one capable of outputting video at up to 1920 x 1080 pixels.

One problem is that both removable card slots require the user to insert a small pin or needle in order to pop out the removable tray, which is fine for a SIM that doesn’t get replaced very often, but potentially a pretty big hassle for those who frequently transfer data between their smartphone or camera and their PC.

The Spectre x2 features a total of three cameras: a single 5-megapixel option in front and a traditional 8-MP cam paired with an Intel RealSense 3D Camera. Surprisingly, the 5-MP front cam is the best of the bunch. In a selfie at the Laptop Mag office, the front cam nailed exposure while also capturing good details in my hair and face, as well as on the wall and TV in the background. In other shots around our office, the 8-MP rear cam often produced underexposed photos with significantly more grain than what I saw from pictures taken with the front cam.

The Intel RealSense 3D cam uses depth-sensing tech to create 3D scans of various objects, but with its superlimited app library, there’s not much to do with them. The one app that is available is itSeez3D, which uses the RealSense camera to scan a face or entire body. The program is quite finicky, demands a fair bit of trial and error, and also doesn’t play nice with reflective objects like glasses or certain types of jewelry.

But in the end, I got some moderately impressive scans of different faces around the office. The scan I got from Associate Reviews Editor Alex came back with a buggy extra polygon in front of her chin, but scans of Associate Editor Mike and Senior Writer Sherri were both met with surprised satisfaction by their real-life counterparts.

Featuring an Intel Core M7-6Y75 CPU, 8GB of RAM and a 256GB SSD, the Spectre x2 sacrifices a little performance to achieve a more palatable price. But fear not, because the difference in power isn’t something that will prevent you from getting work done. Even when I had 10 tabs open in Chrome while streaming a 1080p video from YouTube, there wasn’t a hint of lag or slowdown.

With its Intel HD Graphics 515, the Spectre x2’s gaming fun will be mostly limited to casual titles like Hearthstone or less demanding indie titles like Hotline: Miami. But this 2-in-1 can handle some mainstream games.

When we played World of Warcraft at 1920 x 1080p and auto settings, the Spectre x2 managed 41 frames per second, which is playable, but less than frame rates put up by the Surface Pro 4 (47 fps) and Lenovo Yoga 900 (49 fps). However, the satellite Radius performed much worse, with a frame rate of just 13 fps at the same settings.

Endurance is the x2’s Achilles’ heel. On the Laptop Mag Battery Test (continuous Web surfing over Wi-Fi at 100 nits), the x2 lasted just 6 hours and 31 minutes. That’s 1.5 hours less than the ultraportable laptop average (8:10) and the Lenovo Yoga 900 (7:57), and not much better than the Surface Pro 4 (6:05), which is already pretty lacking. The Toshiba Satellite Radius 12 was even worse with a disappointing life of 5:17.

The Spectre x2 splits the difference between the Surface 3 and the Surface Pro 4 with an attractive starting price of just $800, including the keyboard (the stylus costs an extra $30). For that, you get an Intel Core m3-6Y30 CPU, 4GB of RAM and a 128GB SSD. However, you can select from a faster M5 or M7 CPU, up to 8GB of RAM and a 512GB SSD for a max of $1,400. Currently, there’s also a deal from Best Buy that lowers the starting price of the x2 to $700 when bundled with a two-year wireless contract from Verizon.

The Spectre x2 comes with a one-year limited warranty and a near-pristine install of Windows 10. That means aside from McAfee Live Safe, there’s not much to get in the way of your enjoyment of Microsoft’s automatic switching between laptop and tablet modes or getting acquainted with Cortana, Microsoft’s digital assistant.

The Spectre x2 has a lot of features that show off how good a 2-in-1 can be. Its metal-backed keyboard offers a great typing experience, and the quad B&O speakers and Intel RealSense 3D Camera are nice bonuses that help bring a spark to everyday computing. The optional Verizon 4G LTE connection should be a real boon to road warriors, too. But a word to HP: next time, please leave the kickstand release button on the cutting floor like you did for the Elite x2.

With the x2’s lovely design, solid included keyboard (I’m looking at you, Surface) and more attractive price tag, HP came so close to beating Microsoft at its own game. Better battery life and a more colurful display would go a long way on HP’s next detachable hybrid, but even so, the Spectre x2 is a top tier 2-in-1.