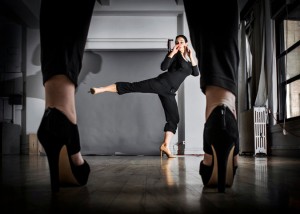 On a recent rainy evening, about 30 women, most wearing high heels, gathered in a Midtown Manhattan rehearsal space and engaged in a series of brisk maneuvers: hammer fists, elbowing out of chokeholds, fierce kicks.

“The idea is to lock in muscle memory,” said the leader, Avital Zeisler, a former ballerina with posture as straight as an index finger and black tresses evoking Cher during her Sonny years.

Ms. Zeisler, 26, is not a model or actress; and her charges were not engaging in some gimmicky exercise class like pole dancing. She is an expert in hand-to-hand combat who has trained members of the military and law enforcement, as well as actresses like Keri Russell, Megan Boone and Amanda Seyfried.

She is passionate about women learning to defend themselves, no matter what they are wearing on their bodies — or feet. And so this workshop, for which she sometimes charges up to $80 a participant, was free.

“The objective is to disrupt the attacker’s thought process — even just to get him to blink,” Ms. Zeisler told the assembled.

Lydia Billings, 24, a photographer and a founder of End Rape Now who was attending the class, was impressed. Her best friend was raped in high school, she said, but Ms. Billings had never before studied self-defense.

“A few really simple, powerful moves can get you out of any situation,” said Ms. Billings, who was wearing a pair of Payless pumps.

Ms. Zeisler is not the first or only person teaching such self-defense techniques. The instructional website Howcast has posted videos about using heels in self-defense (this being 2015, the iPhone is also a potential weapon). And Jennifer Cassetta, 39, a personal trainer in Los Angeles and a third-degree black belt in hapkido, began a class called Stilettos and Self-Defense in 2007.

“Women feel very empowered wearing heels,” Ms. Cassetta said. “I love heels. I love the way my legs look in them. But most women can barely walk in them, let alone run. If you can’t run away, you better know how to fight off an attacker. You have to be prepared at all times, no matter what you’re wearing, no matter how tall you are.”

While it is known that shoes can be lethal weapons — last year, Ana Trujillo of Texas was sentenced to life in prison for stabbing her boyfriend to death with a 5½-inch stiletto heel — they are not always easily accessible when they are on your feet. And they tend to handicap one of the best strategies for self-defense: running away.

But despite warnings about the perils of heels, and the havoc they can wreak on backs and ankles (“Working out in heels is really bad for your calves, and can cause tears or tendinitis,” said Rob Conenello, a sports podiatrist in Orangeburg, N.Y., and the past president of the American Academy of Podiatric Sports Medicine) it’s unlikely that urban women are going to stop wearing them anytime soon. So some concerned with safety are factoring in that reality.

Ms. Zeisler is one of them. At 19, she was sexually assaulted by her boyfriend at the time, after which she went through a debilitating depression. She left her home in Toronto and traveled to Israel, her father’s birthplace, to study Krav Maga, an Israeli form of self-defense.