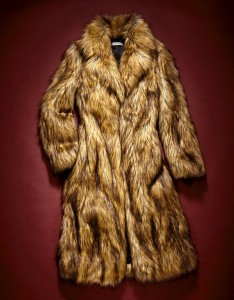 IN AN EPISODE of the popular comedy Web series “High Maintenance,” from last year, a fictitious disgruntled fashion buyer scolds real-life designer Rachel Comey about one of her faux-fur coats. “It looks like a Muppet or something,” the character says, cackling.

Such are the stereotypes of synthetic fur: that it’s a cheap, tacky substitute for a luxury good; that it conjures the bug-eyed beasts of children’s television. But in “High Maintenance,” the joke is on the unperceptive buyer. The coat in question—a curly, deep-piled wrap in an icy pale blue—is inarguably chic.

The scene marks a shift that stylish shoppers have no doubt noticed: These days, faux-fur outerwear is every bit as attractive as the real thing—and, for a growing number of women, even more so.

Ms. Comey recently pointed out that the acrylic and otherwise synthetic textiles themselves have evolved far beyond a Fozzie Bear quality in the past few years. New versions are softer, silkier and far less likely to shed or become matted than the scratchy synthetics of yore; some incorporate real wool fibers. “The advances in technology are super exciting,” she said, adding that her faux furs come mostly from higher-end European mills.

One such manufacturer is Steiff—yes, the German company known for its teddy bears. Pookie and Louisa Burch, the sisters behind New York-based sportswear label Trademark, were particularly taken with a long-haired Steiff material this season, and the snap-front coat they created with it has since become one of the brand’s best-selling styles.

“We actually wanted it to look like a real fur coat,” Pookie Burch said. So lifelike was the result that its appearance in a photo shoot the brand staged with lensman William Wegman and his signature Weimaraners drew the ire of some customers. “I got numerous responses saying, ‘I can’t believe you would shoot a real fur coat on a dog.’ But we would never do that,” explained Ms. Burch.

The Burch sisters, like many other emerging designers, refuse to work with fur for ethical reasons. “We’re big animal people,” said Louisa Burch. “And it’s not that hard to avoid using fur. Why not use something else?”

Until recently, Stella McCartney, who famously foregoes animal skins of any variety, took this stance a step further: For most of her career, she eschewed faux fur to avoid promoting the look of animal pelts. Yet, due to customer demand, Ms. McCartney has changed her tune, unveiling a range of coats dubbed “fur free fur” at runway shows earlier this year in New York and Paris. The long-haired styles appeared indistinguishable from the real thing, though the addition of geometric embroidery gave them a multidimensional effect. All her faux coats come with removable exterior “Fur Free Fur” labels; some even come with “Fur Free Fur” buttons to be worn on the lapel or sleeve so that women can advertise their stance on the issue—and possibly alert onlookers who might mistake the coats for the real thing.

“Women have always been asking us for a fur alternative,” Ms. McCartney wrote in an email. “We wanted to show people that it is possible to create beautiful and luxurious fur-free fur that looks great.” And though Ms. McCartney’s versions don’t come cheap—the embroidered Nyla coat seen on her fall runway is $5,695—they still offer a more affordable alternative to, say, a $29,000 J. Mendel broadtail-and-cashmere topper.